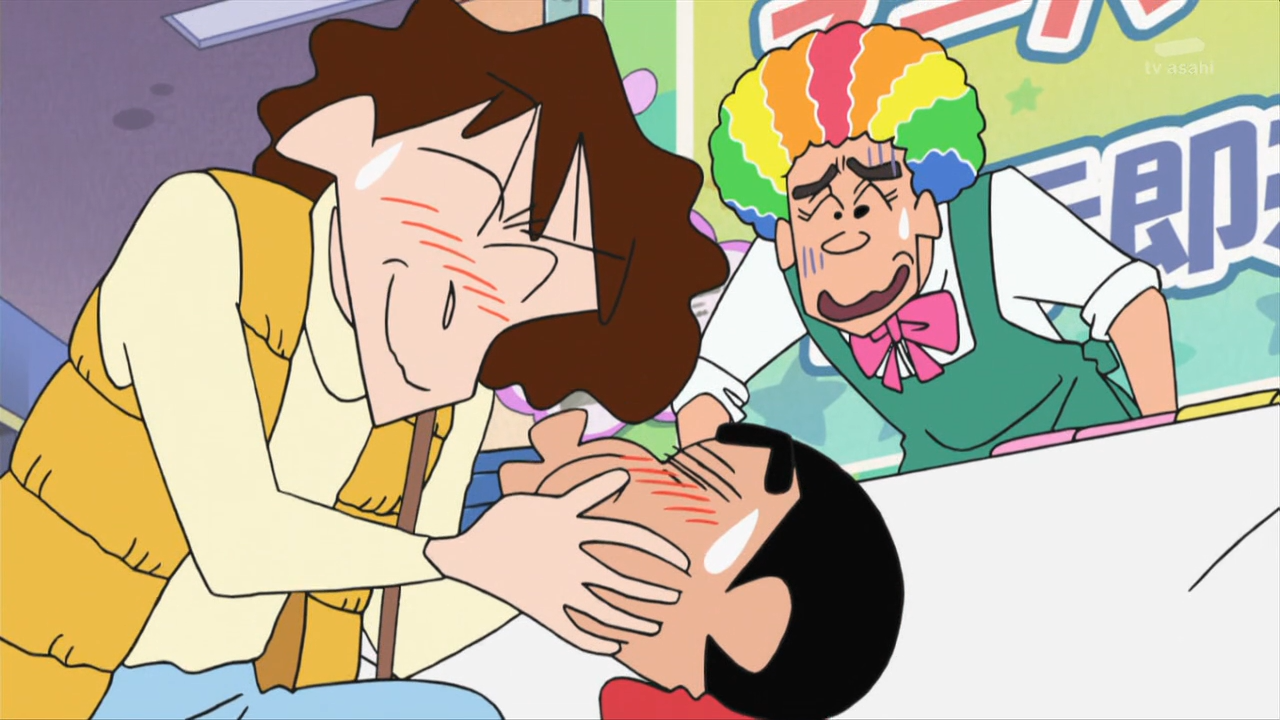 Sorry, folks. I was out of town over the weekend, so the episode was a bit late. There was also a lot of typesetting and jokes in this episode, so it took me longer in general, as well.

I’m not sure if I will put out another episode this week since this one was delayed a bit. If I don’t, I’ll be back with episode 888 this weekend!

Quite a handful of translation notes follow after the break.

END_OF_DOCUMENT_TOKEN_TO_BE_REPLACED 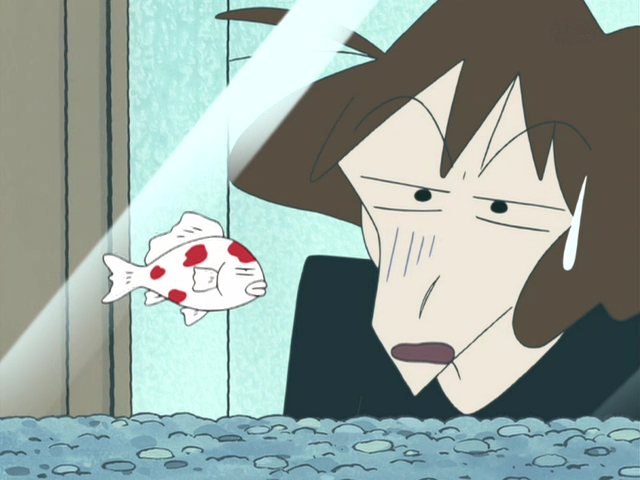 Edit: So when reairing, the episode numbers aren’t correct. For whatever reason, I forgot to correct this one. It’s actually episode 462. I’ll re-release it later if I ever get a TLC. Sorry for any confusion.

I’ve released the newest episode, the oldest episode, and now I bring you an episode from somewhere in-between. This encode comes from a recent reairing on TV, as I do not have the DVD that includes this episode. It’s an early digital episode, but I think it looks fairly decent.

I actually started on this episode last week before 886 aired and was shocked to see that both episodes featured segments with Masao-kun having the hiccoughs. I suppose after 886 episodes, there are bound to be similar stories in there somewhere.

887 will be the next release, followed by perhaps episode 002. I think I’m also going to start working on one of the TV specials fairly soon, as well. Look forward to that :3 And as always, I’m still looking for a translation checker. Someone come help me out!

A translation note follows after the break.

END_OF_DOCUMENT_TOKEN_TO_BE_REPLACED 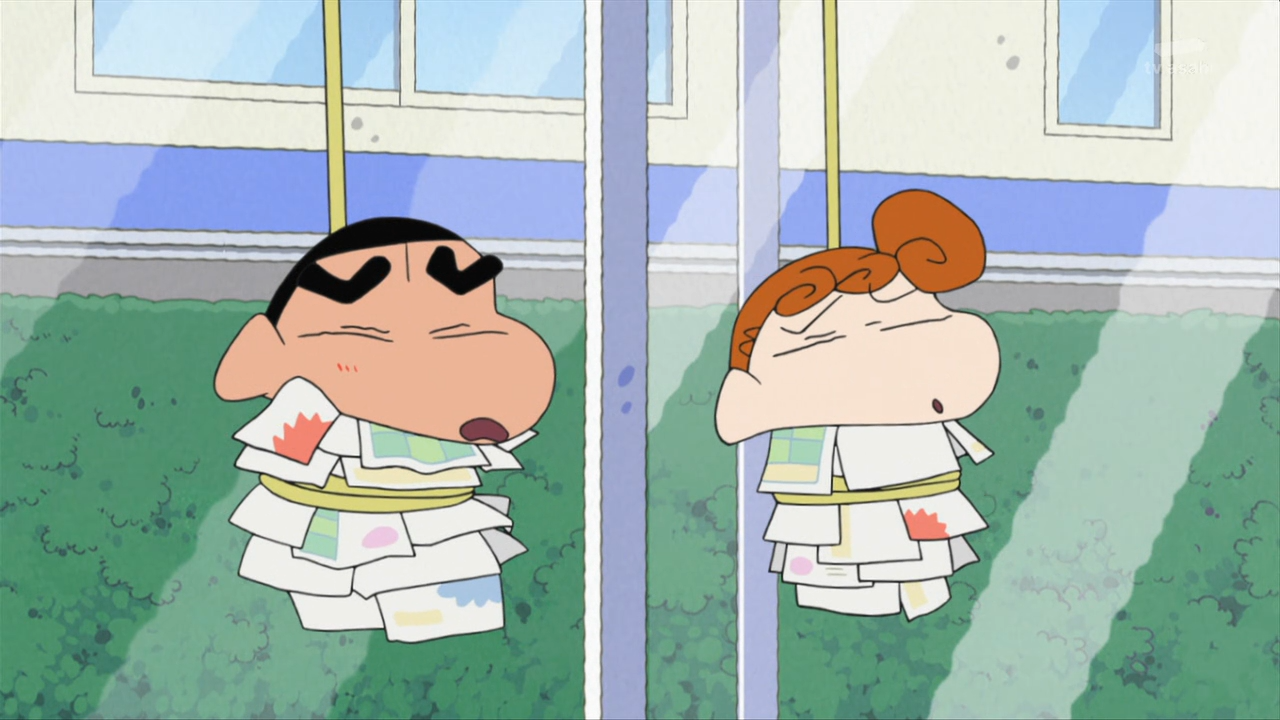 Here is the latest episode for you guys, airing less than a day ago. I may be out of town next weekend, so if the episode is late, don’t freak out. 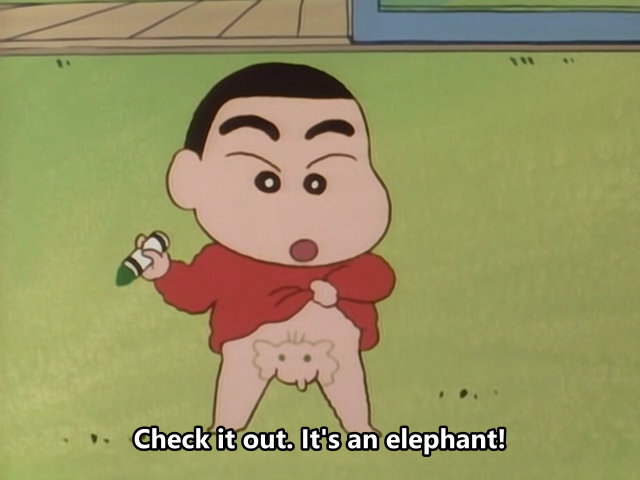 Here is the very first, complete episode of Shin-chan featuring three segments: “Running an Errand,” “Mommy’s Mornings Are Busy,” and “Doodling.” It first aired on April 13, 1992.

I’m still looking for a translation checker. I would love to find someone before I get too far into these releases. I really need some help on this front. Please get a hold of me if you are able to help out.

Don’t expect releases to be this quick. I’m just working through scripts I’ve had built up for months now.

END_OF_DOCUMENT_TOKEN_TO_BE_REPLACED 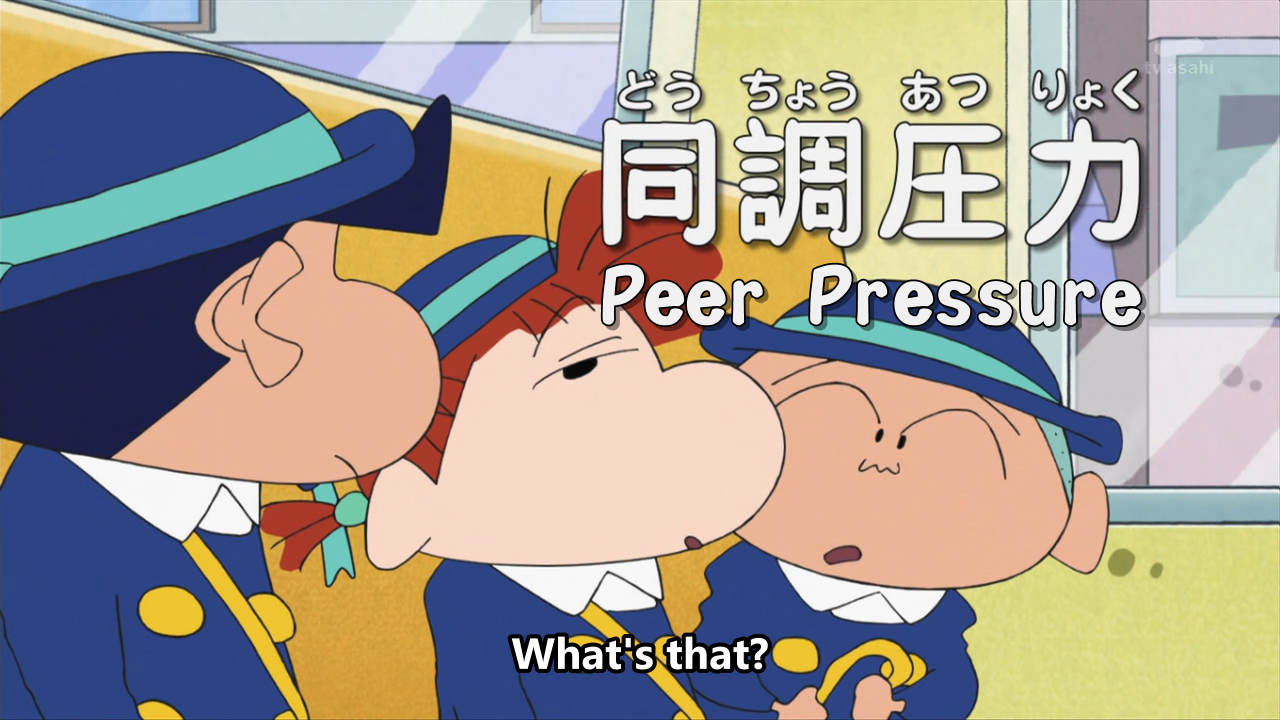 Hey, guys. Here’s the promised redo of episode 885. I’ve done a few minor changes in the script, but mostly it was just fixing things for the new encode.

I have to thank Sammie for providing the RAW for us and Akai-Shuichi for some encoding help. Also, note to Shin-chan subbers in other languages: if you want to use our encode, then please just credit us! We’re releasing it softsubbed for everyone’s benefit.

What’s next? I’m not sure. I’ll be subbing episode 886 after it airs, but other than that I’m not sure what direction to take at the moment. I have a backlog of episodes I can sub, but I’m not sure if I simply want to go backwards (so I would do 884 next), or if I want to start at a given point and work my way back to present. I’ll have to see, though I’m currently leaning towards the latter.

Hope you guys enjoy this, and translation notes follow, as always.

END_OF_DOCUMENT_TOKEN_TO_BE_REPLACED

I’ve decided to move the blog from Blogspot to our own domain and server.

Bear with us while we continue setting it up. 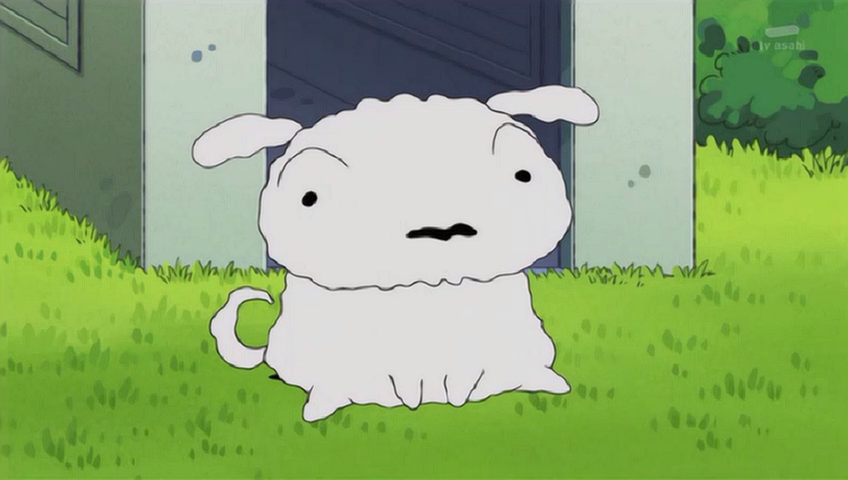 The newest episode of Crayon Shin-chan, airing less than two days ago on February 5th.

I have held off on subbing new episodes simply because there are absolutely no sources. I’ve asked various cappers if they could get the episodes for me, but it always ends in dead-ends.

Because of this, this particular episode is sourced from a very low quality stream. It’s horribly encoded at a bizarre 25fps, with blended frames and blocking galore. It’s ugly, but that’s what I had to work with. I’ve tagged this release with a low-quality tag to indicate this. Since this is a low quality release, I also did not have this TLC’d. This episode had fairly simple dialogue, anyway. The typesetting is also a bit of a mess in a few sections because of the terrible video quality.

Despite those problems, this is a very watchable release. I hope you all enjoy it.

Also, I am desperately in search of someone who can provide HD RAWs, both old and new. I’m willing to sub whatever episodes I can get my hands on. I am still looking for translation checker, as well, to go over my translation and help me with the puns and jokes. Please leave a comment or contact Skr at #Shindou-Anime@irc.rizon.net if you can help out.

Edit:
Since releasing this, I’ve already received help securing transport streams for the newest episodes (Thank you, Sammie!). I plan to go back and redo this episode to an HD encode, allowing me to fix the typesetting and any other problems! Look forward to more releases!

If anyone else happens to have even older HDTV raws, please still fill free to contact me.

END_OF_DOCUMENT_TOKEN_TO_BE_REPLACED

Hey, guys, I thought I would make a post asking for some help and give you an update on what we’re working on.

First up, I’m in desperate need of a translation checker. I’m looking for someone that is experienced who can help me with some of the tougher lines and jokes. convex has been kind enough to work on the movies with me, but for the TV episodes, I think I need someone else. As you can see below, I do have some episodes nearly done, but I do not want to release them without having the translation gone over by someone else first.

Secondly, I’m looking for HDTV RAWs. I know there’s a ton out of there, but I’ve only been able to grab a small handful of them. All I’ve come up with is hardsubbed Chinese and Vietnamese fansubs, and I don’t want to work from those. If you have any HD episodes, please contact me so I can sub them!

I’m not in a huge need of DVD ISOs at the moment, but if you have some to offer, get a hold of me, and we’ll talk. I already have a decent size collection that I’ve obtained from ADC, Share, and PD.

Any help will be greatly appreciated! Just leave a comment here or find me on Rizon under the nick Skr. I hang out in #Shindou-Anime.

Status after the break.

END_OF_DOCUMENT_TOKEN_TO_BE_REPLACED 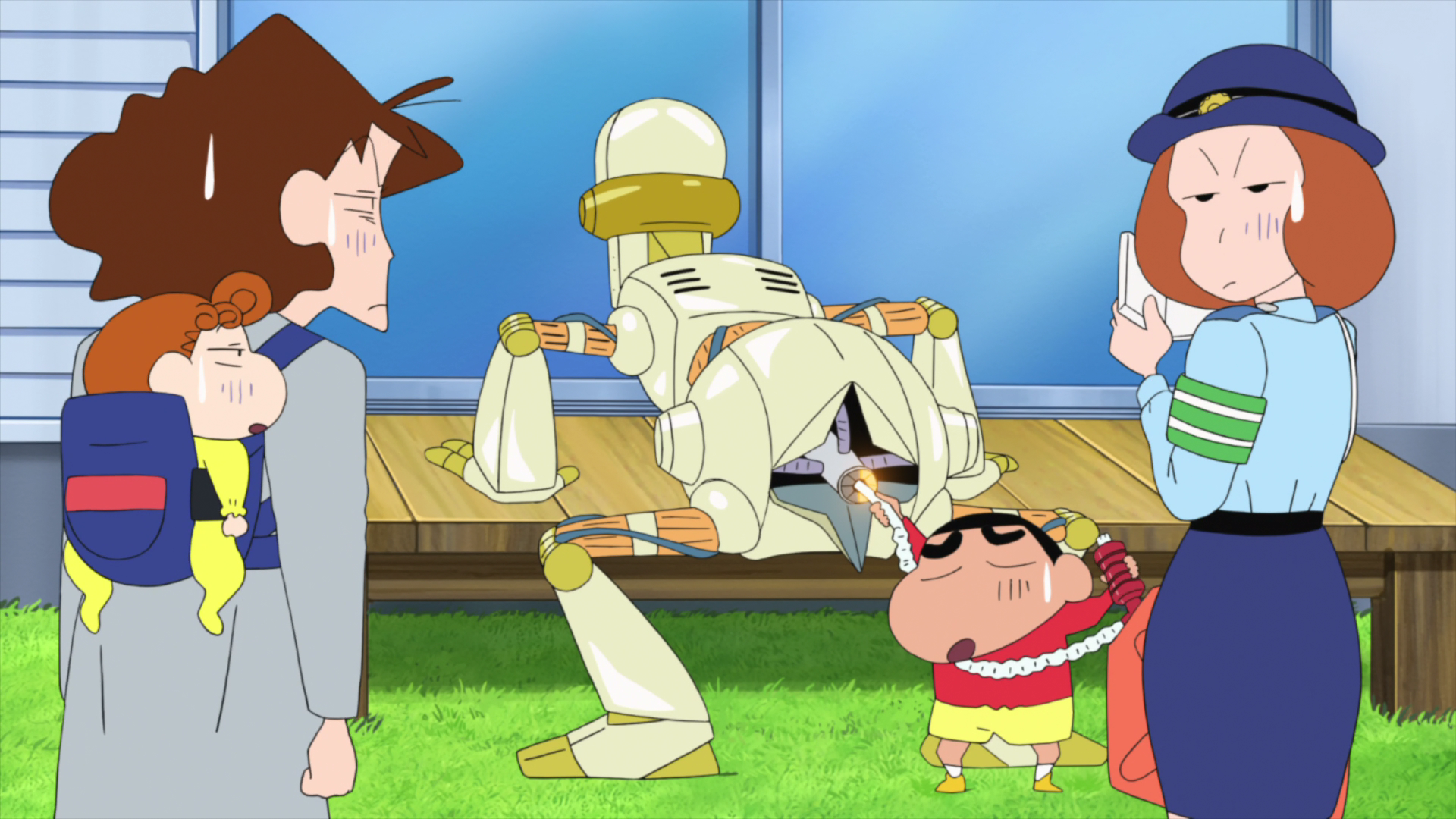 And it’s out! Our first release! A hilarious, yet touching family movie that I hope you all enjoy!

I started working on this movie sometime in August. I knew Shin-chan was largely unsubbed, so I thought I would take a stab at subbing -something- of it. The TV series is extremely daunting, so I decided to go with a movie instead. The majority of the films actually have been subbed, with varying degrees of quality, but the newest one hadn’t been touched yet. Looking at the staff credits, I saw that the script was written by Kazuki Nakashima, the mind behind Kill la Kill and Gurren Lagann. With that name alone, I decided to tackle this film.

After I finished translating and timing the movie, I was lucky enough to get convexity to check over it over. He helped a ton with all the puns, jokes and references — the toughest part in trying to translate this series. I then asked Collectr, one to never overlook something unsubbed, if he would be willing to edit. Of course he accepted! I tried to look for a typesetter, but couldn’t find anyone that would work on Shin-chan, so I did it myself. Thus some signs are typesetted, while the more complicated ones are just an8’d. Quality checking is usually where movies can stall for a long time; however, Calyrica, bananadoyouwanna, and Matze149 all came through for me and helped out in this department.

I want to thank all of them for their help.

Are we doing more? Of course! I’ll be making a blog post in a bit talking about what we’re working on, and where I need some help. But, yes, we are working on Movie 23. I am looking for a translation checker for things besides Movie 23 though! I’m also looking for any HDTV raws of the TV series. I only have a handful of them, but I know more exist.

Translation notes for this release follow after the break, but be aware there are some very mild spoilers.